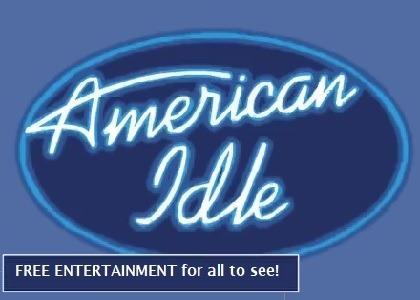 MotherOfTheMP3
AmericanIdol.ytmnd.com
EPIC DOMAIN GRAB on this American Idol parody, although the GIF itself displays it as "American Idle". This site I made is educational, and illustrates the drama that occurs when FREE ENTERTAINMENT activism gets advertised. This site is an edited version of an old flash cartoon from Newgrounds that was about Gary Brolsma and Numa Numa, but instead includes singer/songwriter Suzanne Vega, whom is known as "mother of the MP3", and even this site itself uses an MP3 file for it's audio, so respect and honor is key to this. This site has a storyline with American Idol judges Randy Jackson, Paula Abdul, and Simon Cowell. This site features a sample of the song Tom's Diner, the song used to aid development of the MP3 file format. For shits and giggles, I even included some subtle Leonard Cohen references (but not Goatse references, since that would have made this NSFW). I also made some references to the new jack swing music genre since the DNA remix of Tom's Diner gave the NJS sound to an a cappella Suzanne Vega song, and also note that Paula Adbul made some new jack swing tracks back in the day, and it seems like Simon Cowell doesn't like the mother of the MP3 hence his preference to have rusty nails shoved into his ears.
American Idle
youtu.be/BE3DNJHWFSo + edits to include mother of the MP3 instead of the Numa Numa guy
Tom's Diner, or the song used to aid development of the MP3 file format
American Idol
mother
of
the
MP3
Suzanne
Vega
FREE ENTERTAINMENT
Tom's Diner

and this is the last time I will be logging on, unless something serious compels me to log on again!

and this is my last comment ever on YTMND

so, happy 59th birthday to the singer/songwriter that made OVER 9000 audio assets possible on YTMND. Mother of the MP3 needs her respect!
ScottinTexas
4:39:52 PM CDT
(0)
Hope you are well.