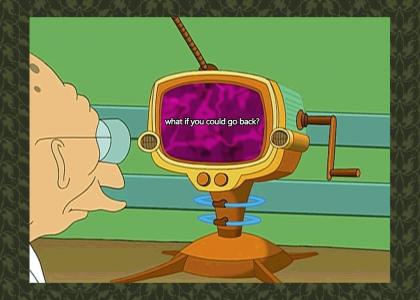 pad
whatifmachine.ytmnd.com
what if you could go back to the 90s?
freeware floral pattern pack
professor farnsworth's world renowned "what if machine," and misc. nostalgic imagery from the 90s
polaris - hey sandy
90s 80s nostalgia childhood

Please login or register to comment.
0 of 2000 characters used.
Lynch286
4:21:15 PM CDT
(12)
I remember those things!!!
batchler
8:23:06 PM CDT
(-4)
[ comment (and 1 replies) is below rating threshold and has been hidden ]
(-4)
this brings back bad memories of my Dad taking me to the basement and forcing his index finger in my anus and telling me to keep quite!
GBart
1:37:17 AM CDT
(1)
Keep quite what?
Gravijar
4:32:40 PM CDT
(0)
Commander Keen
hdofu
4:22:20 PM CDT
(6)
yes, I'd go back in a heartbeat
lickitwellhiem
4:58:43 PM CDT
(18)
if this isn't the quintessence of adulthood-crisis driven nostolgia then i don't know what the fuck would be.
fearcondom
5:13:39 PM CDT
(5)
i knew we kept you around for a reason
LegoLewdite
6:28:31 PM CDT
(0)
[ comment (and 4 replies) is below rating threshold and has been hidden ]
(0)
You say it all like it's such a bad thing. And yeah, as a trend, nostalgia borders both the insipid and easy. But otherwise, like on an individual basis, nostalgia just takes the form of any other kind of list (even a list of one) - it is a category exercise reacting to the chaos of a post-human world. When too much information (or a misreading thereof) renders one's culture nonsensical, lists are a way to construct a logic. Okay, maybe it is just insipid and easy - who remembers Dr Fad?
LegoLewdite
6:31:44 PM CDT
(5)
I've heard this called the Remix age, but I think it's just the age of Nostalgia, an age we will one day look back fondly upon. Thing is it never was what it used to be.
Xerxes36
7:13:24 PM CDT
(4)
I think the increasingly fast pace of technological change and the insecurity it causes creates the drive for nostalgia - combined with vast libraries of historical imagery being made available to artists and taste-makers.

Something similar happened in the victorian era - rapid industrialization, combined with the advent of effective color printing and compendiums of antique patterns/motifs being disseminated.
LegoLewdite
7:23:30 PM CDT
(2)
Ancient Chinese Curse: May You Live in Interesting Times
Xerxes36
7:35:03 PM CDT
(1)
correlated Ancient Egyptian Jinx: May You Live in Uninteresting Times....
lickitwellhiem
9:13:05 PM CDT
(0)
ever seen a complete work that is heavily nostalgia driven ? if you have, you probably misinterpreted most of what you saw.
lickitwellhiem
10:32:58 PM CDT
(0)
shit, comment edit:

ever seen a complete work that is heavily nostalgia driven *with nostalgic content you are not familiar with* ? if you have, you probably misinterpreted most of what you saw.
LegoLewdite
7:04:47 PM CDT
(2)
I am often nostalgic in the present tense. I miss now sometimes.
TheeBatman
5:06:42 PM CDT
(2)
Face! Pete and Pete, WILD AND CRAZY KIDS... god those were the days.
fearcondom
5:12:57 PM CDT
(-2)
[ comment (and 1 replies) is below rating threshold and has been hidden ]
(-2)
youth fetishism is pathetic
chibidw
5:57:43 PM CDT
(4)
Yeah, totally not like old men who talk about how they wish it were the 60s again, before all those punk kids started walking on their lawn and when times were simpler and better and you could go downtown, see a talkie and get a coke and a hot dog all for a grand total of a nickel. It's not like it's a generational behavior trend or anything, no way.
pad
5:16:56 PM CDT
(0)
@fearcondom ha, you make it sound like i'm some weirdo suffering from an unresolved childhood complex. this was inspired by a nostalgia thread @ http://www.digitalgangster.com/4um/showthread.php?t=128119

there's nothing wrong with getting a little nostalgic here and there ;p
loerel
5:25:49 PM CDT
(0)
nostalgia!
MoonMansion
5:31:33 PM CDT
(0)
I'm always 90's nostalgic, but you have to realize it's because Nostalgic people's life's are so shitty and they are losers now. So appreciate you life now and try to define a decade.
pad
5:34:21 PM CDT
(2)
my life is awesome, dude. great success. and being a kid actually sucked, 90's nostalgia is just one of those things where you remember something being cooler than it actually was
CATAL
10:51:42 AM CDT
(1)
it's not a matter of remembering something being better than it was, it's a matter of your tastes and likes/dislikes changing over time so when you actually go back and watch old episodes of Pete and Pete and don't enjoy it anymore, it's not because you remembered it being better than it actually was or is, it is because you're an adult now and have adult tastes.

and being a kid didn't suck, it was great because life was so much simpler and you had no real problems or obligations, which is probably why we look back upon all these things so fondly. we associate the freedom and carefree attitude of childhood with those things.

that beings said, nobody ought to wish to remain a child forever, because as you grow and mature you realize that childish things are just that: childish things. still, that's no reason not to look back upon childhood fondly.

but to actually wish to go back to it, that seems more like regret than nostalgia.
prairiedogeric10
5:36:51 PM CDT
(2)
First I was going to say "5 for Yak Bak" but then I saw SkiFree and Land Before Time and lost complete train of thought.
Anig
4:56:41 PM CDT
(0)
I think he put land before time in there to guarantee your 5
LegoLewdite
6:19:17 PM CDT
(4)
Go back? I never left.
LeakyMule
6:26:18 PM CDT
(0)
I gave it a five!! But i would give you a 10 if you added the finglonger.
pilleater
6:28:04 PM CDT
(0)
I would be much happier in that time period.
Why-Disciple
7:02:47 PM CDT
(1)
Thing is, the 80s and 90s were great decades to be a kid, because that was when cartoons and kids' shows were creative and of good quality and didn't encourage kids to be sluts, and games were simple enough for everyone to understand, with little controversy over violence.
Xerxes36
7:29:01 PM CDT
(11)
The cartoons were generally asian-animated low quality crud. The games were simple because there wasn't enough drive space to make them complicated. When graphics advanced to a point where "violence" could be depicted, the developers made violent games. Mortal Kombat came out in 1992, I remember when it the game's violence was a featured story in Newsweek.

Only, you forgot one element. Cartoon Network's Space Ghost Coast to Coast.

Oh well, nostalgia is a strong and stirring emotion, and many people are uncomfortable with it, because of its nature, sometimes a yearning to go back and live life as you idealize it to have been... but every once and a while, it's a sharper feeling when you know that what used to be was truly special, and good.
GaRRbagio
1:53:54 AM CDT
(0)
FUCK MY HEAD NOSTALGIA
Demokirby
3:49:23 AM CDT
(4)
Old people get nostalgic, which is true. But I missed the 90's since the early 2000's, when I literally just got into high school. I sensed my generation got nostalgic at a extremely early age. Hell, my younger brother is 18 and he misses the 90's and he was still a kid when they ended.

No one really missed the 80's till the 2000's. 90's were being missed since the 2000's start. (Proof is just how quick I love the 90's came out and trivial pursuit 90's edition came out right around we went into Iraq in 2003) 2000's has been one problem after another, from the controversy of the Election, 9/11, being stuck in Afghanistan and Iraq, enormous natural disasters including Katrina and the worst economic crash since the depressing. Then you have technology penetrating every aspect of our lives possible, there really is no existing safe havens left.

We now have a massive Oil spill and the recent coal mine accident. A President who has not lived up to almost any hype that was built around him(at least yet.) And it doesn't help morale when popular cultural icons seem to be dieing left and right.

I bet people in the 30's and early 40's were quick to start missing the 20's. Sure, booze were tougher to get legally and you had the gangsters (which organized crime actually gave the 20's the lowest violent crime rate in American history. Since the Gangs only aimed for cops and each other. They wanted public favor on their side.) But it was great time to live compare to the coming disasters that would happen in the next decade and half.
xxxxthegoatxxxx
5:08:24 AM CDT
(0)
This is the best comment I've ever read while on YTMND, and I've been here since 2006. Well done.
WhargouL1942
12:44:57 PM CDT
(-1)
[ comment is below rating threshold and has been hidden ]
(-1)
power rangers are fucking gay.
Codemanrose
1:18:34 PM CDT
(0)
Yes, I would love to go back. Those were the good days.
lickitwellhiem
1:54:25 PM CDT
(-6)
[ comment is below rating threshold and has been hidden ]
(-6)
jesus. childrens toy, videogames, tv shows, clothes, even children's snack food.

you didnt even do a good job cutting out the screen on that device from the hugely unfunny show Futurama.
flotilla
3:33:07 PM CDT
(0)
how come nobody's mentioned ghost writer yet
shadebrand
5:00:48 PM CDT
(0)
I'd bring my own weapons cause my SAFETY NOT GARUNTEED.
lickitwellhiem
5:50:04 PM CDT
(-1)
i'm listening to rap music while i write this.

i have two laptops open and one of them has imageready running. the other one has adobe after effects. im using this computer to write this.