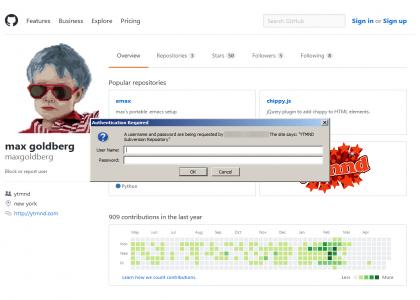 Omicron2
openytmnd.ytmnd.com
YTMND needs to be open source in order for it to survive, work here has halted and popularity has dropped to a negligible level. Smite down the website and upload the code on Github, a thousand will take its place and YTMND will live on forever in an ever improving manner.
https://github.com/maxgoldberg
YTMND's repository.
Lusine - Arterial
Max
YTMND
open
source
Github
SVN

Please login or register to comment.
0 of 2000 characters used.
Omicron2
8:56:03 PM CDT
(-4)
[ comment (and 1 replies) is below rating threshold and has been hidden ]
(-4)
Now I get it, my userID on here is [i]223850[/i], and Raiderkenny's userID is [i]22385[/i] (look at the page source.) The form Max is using for sponsorship which creates a POST request probably is no longer compliant with Paypal, or there is just some disagreement between the two for verification. Yet another item that needs to be fixed...

Another thought, if no serverside checks are being done on site creation, you could make YTMNDs that direct to outside links. Bypass Max's regular expression checks in the .js for domain checking (or just force another post request) for a site with a subdomain like "google.com?" which should create a redirect for "google.com?ytmnd.com," users would then go to Google when they click the site with "ytmnd.com" passed during the GET request.

If Max does return to sort out this potential downvote issue (assuming it is alt based,) that will be the adequate course of action to remedy any possible issues. He can just follow downvotes (such as those possibly on this comment) to a common source.

I am raising a white flag of neutrality here, I am only interested in Max opening the source up for this website so that we can experiment and possibly improve on it.

If I sound unsympathetic or unmoved towards other users affected by aggressive copywrite claims, I apologize. I've seen the internet go from a place of wonder to what it is now. My air of unsympathy is purely disappointment of the system and copywrite claims in general - and realizing the futility of trying to influence major corporate powers like Google for the idea of free entertainment.

I'm also always grateful for others wanting to backup YTMND sites, I can't do it alone especially via the method I'm employing (keeping the site assets as they are.) Others backing up YTMND sites would cover those I would certainly miss, or I would never bother with. Uploading sites to Youtube is still an acceptable medium as more would be able to experience them opposed to my more private backup of material.

here or anywhere so GO FUCK OFF you stupid fuck. dont tell ME SHIT EITHER and fuck you and your jew cohorts thik like i give a fuck
ldrancer
4:59:42 AM CDT
(-2)
[ comment is below rating threshold and has been hidden ]
(-2)
well with the current state of webiste ideas, max's site is like "false advertising.