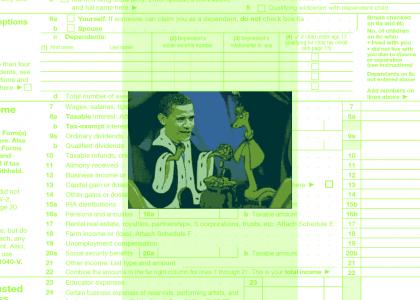 Xerxes36
turbotax.ytmnd.com
A sudden, angry burst of inspiration after filing my return today. FYI: Although Prince Barry Obama is shown this isn't intended to be a partisan rant; I'm sure Sir Hiss is a Republican.
Your friendly local Leviathan
Disney's
Robin Hood
death
turbotax
PJ

Also, a big fat redneck can spend his whole life in front of the TV watching pro-wrestling and eating pork rinds. Does not mean that those things are better.
madDogSoldier
5:16:04 PM CDT
(-2)
(spend his whole life happy)
Marlboro27
8:26:45 AM CDT
(3)
I miss the days where I got money back from taxes
madDogSoldier
5:49:36 PM CDT
(-1)
Agree.
Akrom
8:04:08 PM CDT
(2)
<death and taxes> sucks .... death to blizzard
FlamingTP
4:36:06 AM CDT
(-2)
[ comment (and 7 replies) is below rating threshold and has been hidden ]
(-2)
Corporations pay zero taxes, hell GE was paid a few billion in tax BENEFITS. Republicans FTL.
Lastimero
10:58:00 PM CDT
(1)
What? Really?? Somebody should do something about this!
GaryGnu
8:02:18 PM CDT
(5)
GE's CEO is Obama's best buddy.
mormonator
1:47:52 AM CDT
(3)
LOL so true. It's too bad the only other option (Repubs) would feel the need to out do Obama by giving GE billions of dollars of our cash. We are fucked. Get ready to feel the squeeze lower and middle-class tax brackets.
GaryGnu
2:52:57 AM CDT
(1)
Constitutional amendment banning business contributions and involvement in politics
mormonator
3:38:55 AM CDT
(2)
You and I have been done this road before. You can't deny 1st amendment rights if corporations are considered legal persons. My apathy level is probably mirroring your's right now when it comes to the outlook of any real problem solving in American politics.

Gangstas like you and I should just drink our Patron Silver from the awkward little bottle it comes in. Continue on making dumb comments and YTMND's and then at some we will die.
GaryGnu
10:28:03 PM CDT
(-1)
You can deny it if you pass another amendment doing so...
madDogSoldier
6:40:30 PM CDT
(0)
guys, the system is fucked, It seems like it did not go over the cliff yet because it still has some momentum in mid air. I suggest getting out of the USA.
Father-McKenzie
8:39:21 PM CDT
(3)
Xerxes36: i sent a 1099-MISC to your Mom for all the services she has rendered to me in fiscal year 2010.
Father-McKenzie
8:56:51 PM CDT
(4)
http://img716.imageshack.us/i/unledhvs.png/ Here's a copy in case she misplaced it
madDogSoldier
6:34:14 AM CDT
(0)
[ comment (and 2 replies) is below rating threshold and has been hidden ]
(0)
how old are you?
Ochobobo
12:52:48 AM CDT
(4)
So impertinent a question so early in the conversation. How promising.
madDogSoldier
10:52:57 PM CDT
(0)
[ comment is below rating threshold and has been hidden ]
(0)
I am not the one who is obviously throwing a hissy fit because of a site that offends my ideology
Jephro101
5:41:55 PM CDT
(0)
Old enough to make me laugh.
madDogSoldier
5:12:08 PM CDT
(-3)
the best part is that you did not even spell your own name right
blfbftg
2:27:55 AM CDT
(1)
Yeah? A lot of YTMNDers makin' a 6 figure income? Seems like more of a reason to tax the shit out of 'em, if you're actually working so little you can devote some time to this shit...
madDogSoldier
6:33:36 AM CDT
(-2)
[ comment (and 20 replies) is below rating threshold and has been hidden ]
(-2)
yes, lets punish people for being productive and hard working...
LegoLewdite
8:13:54 PM CDT
(0)
[ comment (and 19 replies) is below rating threshold and has been hidden ]
(0)
yes, but that kind of pull-yerself-up-by-yer-bootstraps mentality ignores the people who never had boots. it's a fine ethic to apply to individuals in a vacuum, but if you account for institutions, what it amounts to is injustice. how else does that philosophy account for systemic disparities between groups? unless, that is, you're really a misogynist bigot. not saying you are, just that it's the implication of your train of thought...
madDogSoldier
8:14:35 PM CDT
(-1)
Our country was built by people who started with nothing.
LegoLewdite
9:02:43 PM CDT
(1)
Define "nothing" if that's the case, cuz Monticello looks pretty sweet.
madDogSoldier
10:51:58 PM CDT
(-1)
People coming off the boat with some tattered clothes in a bag off the boat at Ellis Island.
LegoLewdite
8:17:07 PM CDT
(2)
Holding up the exploited as an example of why we should favor a flat tax seems stunningly perverse to me. Well done!
madDogSoldier
7:49:31 PM CDT
(-1)
I never said I favored a flat tax
madDogSoldier
11:57:04 PM CDT
(-1)
By the way, those folks were exploited in Europe - they came to America and drastically improved their lot. If that were not so, then immigration would have came to a griding halt way back in the early 19th century.
madDogSoldier
8:18:03 PM CDT
(-1)
People earning money fairly is not injustice. To say otherwise is propaganda. Of course the market does not exist in a vacuum. Otherwise, it would not be a market. The fair way to earn money is through cooperation, usually by providing good or better goods and services for the right price. No millionaire who became rich this way could have done it without other people.
LegoLewdite
9:07:49 PM CDT
(0)
[ comment (and 6 replies) is below rating threshold and has been hidden ]
(0)
You're being disingenuous. The injustice wasn't people earning money fairly. The injustice was "the system's" (pick one) historic bias. If you disagree with that, you've clearly seeing more diversity amongst the powers that be (presidents, c.e.o.'s, robber barons, etc.) than I have.
And that millionaires cooperate was sort of my point: socialism for the rich, capitalism for the poor.
madDogSoldier
10:42:45 PM CDT
(-1)
No, I am not being disingenuous, I am staying on topic. I started off by defending those who make 6 figures. You then went after me with a very common strawman argument about how I am not smart enough to realize (or just not honest enough to admit) that rich people didn't just catch money from heaven, that other people had something to do with it. The implication of course was that they are somehow crooks.

I then responded and agreed that virtually every rich person got rich by selling/trading/working with others. However, my conclusion happened to be was that money/goods earned in this fashion is fair.

I simply responded to what you wrote - not all this baggage which you attached afterwards. You were not talking about these other things like 'the systems historical bias' - what does that term mean anyway?

No, your definition of socialism for the rich is incorrect. 'Socialism for the rich' refers to favoritist regulation from government for inside players, but punitive for competitors; sweetheart contracts from the government to the rich/corporations and also government subsidies for the rich. Mere cooperation is not socialism.
LegoLewdite
8:49:41 PM CDT
(1)
What you did not respond to was how your (Rand's) philosophy accounts for, what dooshy and stoned way did i put it?, oh yeah - "systemic disparities among groups?"

For example, women have historically (meaning "over the course of time") been subject to a certain amount of bias (meaning "less pay"). How does your rugged individualism account for this phenomenon? I've been assuming that the only way one can really believe that the glass ceiling is justified is if they believed woman were essentially lesser beings. That's what we typically deride as [i]essentialism[/i]. But maybe I'm off-base here. Maybe you've found another reason? Same goes for any other other you can name.

As for the semantics, okay then, not socialism for the rich and capitalism for the poor then. Howzabout cooperation for the rich and competition for the poor?
madDogSoldier
8:53:07 PM CDT
(-1)
[i]"What you did not respond to was how your (Rand's) philosophy accounts for..."[/i] we were not talking about Rand. I saw no need to bring her up. Are you referring to how I said that people should not be treated as criminals for simply being more successful than others? That those who earned their money fairly and squarely can possibly be admired?

That sort of idea goes back through the ages. It is actually the default idea of people unless they are brainwashed at a young age into believing propaganda. Usually from religious cults or secular cults like the Marxists.

Women earn less money for a variety of reasons. For the longest time, they pretty much stayed home and earned nothing. Over time, they ventured more and more into the workforce. It takes time to catch up.

Women also tend to be less aggressive than men. They are more likely to prefer safety. To be a successful entrepreneur requires one to take considerable risks. Men are more likely to take risks. Guess who chased after the wooly mammoths and guess who stayed back in the cave to watch after the young?

Speaking of the young, if a woman interrupts her career to take some time to raise small children, that is time that she is not constantly updating the job skills. If she has a job like an engineer or a computer programmer, her entire field can drastically change in the few short years women typically take to raise small children.

Also, there are a lot of high paying physical jobs that many women simply do not possess the physical strength to perform on. Can you imagine your mom operating a jackhammer or swinging a sledgehammer?
LegoLewdite
6:39:17 AM CDT
(2)
lol?
Lastimero
10:50:57 AM CDT
(1)
lol!
madDogSoldier
7:51:07 PM CDT
(-1)
is that nervous laughter, Lego?

The more I read gr33nscr33n, the more he comes across as a spoiled 12 year old know it all
madDogSoldier
8:20:57 PM CDT
(-2)
Your implication that I am not a misogynist bigot does not make me angry so much as it makes me sad that you have such a limited library of arguments. You seemed like you were smart enough to not automatically accuse an opponent of being a bigot. Not saying your'e not, just that it's the implication of your train of thought.
LegoLewdite
9:12:42 PM CDT
(1)
So you're upset that I didn't call you names, tried not to personalize it, and then you want to respond with passive aggressiveness and playground repetition? I don't think we'll be talking anymore, as you're being a terrible troll (gasp - ad hominem!)
LegoLewdite
9:18:22 PM CDT
(0)
(we can still be facespace friends though)
madDogSoldier
10:51:02 PM CDT
(-3)
First of all, I was not upset, just disappointed. I was also not disappointed because you did not call me names, but because of your implication that I was a bigot, after simply stating that those who have earned their money fairly and squarely deserve it.